Not entirely, but soon! The official word at the Microsoft Australian Partner Conference was that the Australian Azure Datacentres would be online before Christmas. The unofficial word was early October. I also heard someone say the sixth of October, but that could have been a lie.

Today I caught a glimpse of them in the wild when spinning up a WordPress site on Azure. (I’m not sure if ‘spinning up’ only refers to virtual machines, though let’s assume that it doesn’t.)

When the time came to choose the location of my MySQL database, I was presented with the following options: 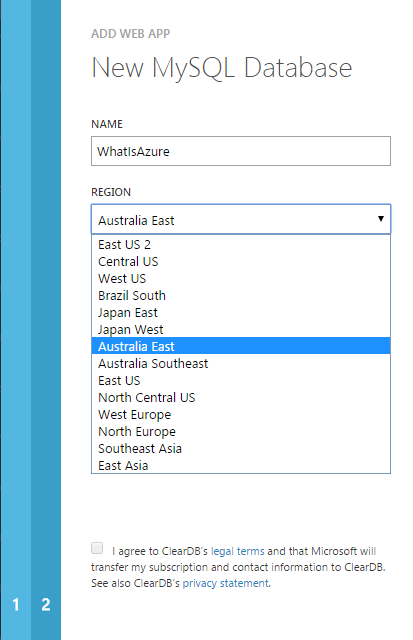 Note the presence of Australia East and Australia Southeast!

Azure’s MySQL databases are actually managed by a company called ClearDB, though they still run on Azure’s hardware. I’m not sure what’s happened here – it may be intentional, though perhaps ClearDB has let the cat out of the bag a little early.

It might just be limited to MySQL databases. I tried creating a Virtual Machine straight away, though the closest datacentre is still Southeast Asia.

Want to join the discussion?
Feel free to contribute!

My Surface Pro 3 Arrived What is Azure RemoteApp and why should I care?
Scroll to top